I have always wanted a hat but most hats nearly always require a “uniform” to go with it. Bowler hat, you need a pinstriped suit. Stetson, you need a horse and boots. Flat cap, you need a landrover and a pigsty.

Suffice to say that I could never find a hat that did what I wanted it to do and still looked OK on me (we’re not taking cool like Ol’ Blue Eyes or Mr. Jones*).

I was searching for a hat which would keep the rain, sun and wind off my head and out of my eyes as I walk or cycle about. But finding one that didn’t mean I had to change my wardrobe was difficult. I eventually plumped for a baseball cap (with a light built in), which did most of the above. Though, I had to really tie it on to make sure that it stayed put, which would make a mark on my head and sometimes give a slight headache. And the cap didn’t cover my neck or ears on sunny days. So, it was good but never perfect.

Then I found the Tilley Hemp TH5 hat. Follow the sizing guidelines and you will have a hat that graces your cranium very comfortably. Even on the hottest of days it’s not like a tea-cosy that boils your head. The large brim gave a great shadow and really kept the rain out – not only out of your eyes, but off your whole head. The straps made sure that the Tilley would stay on your head even in the strongest of winds. I know, because I was in a 120km/h sand storm and it never left my head. I even wore it to dive under huge waves in the South of France, and it stayed well-and-truly put. 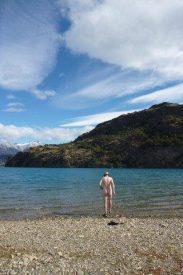 I have now worn it for the best part of nine months, everywhere and anywhere, and all the time. Simply put, it has become part of me, and friends joke that it must be surgically attached. It is comfortable to wear, light, warm and cool at the same time. The floating device in the, shhhhh, “secret” pocket, has saved me some good old whacks to the head and cut down on the cuts and bruises that I would normally get. (The world was not build with over 6″ in mind so it is a hazard we giants live with everyday.) I even feel naked when I do not wear it, like when you take your wrist watch off or wedding ring, there is something missing and you do not feel whole.

Now, here comes the but, since there is always one.

At first the brim was nice and strong, though the wind in London wasn’t that strong while I still lived there. I washed the Tilley as per the instructions and right away I could feel the brim getting softer. (We’ve now been on the road for three months, so I can’t wash it as often as I would like and sweat and the sun have faded it, but I can live with that.)

But the Tilley does struggle to keep its shape in winds over 15-20km/h, which aren’t really that strong if you’re cycling with it on. The photo above was taken on top of a hill where it was easily blowing a 80km/h wind, and I accept that the brim might not handle that. But at normal cycling speeds I would like to be sure that the brim does its job and stays firm, rather than hampering my view. In the wind, the brim either bends down and covers your eyes (not good when cycling). Or, it flips up and makes me look like Yosemite Sam, letting rain, wind and sun into my eyes. Again, not the best when cycling.

Now, if only Tilley could make a hat like the Hemp TH5, or the TWC4 Outback Hat**, which had a brim as stiff as a baseball cap. I would happily be a guineapig for a new design (hint, hint, nudge, nudge). I’m sure that I would put it through its paces in style as we make our way up the coast of Chile.

*) OK, I’ll be honest. I did catch a glimpse of myself in the mirror with the hat on and burst into a rendition of dan da da da, dan da daaaa…. Yes, I’m a big kid.
**) I’m pretty sure that this would be my n+1 in hats, where n=the number of hats you already own.