The hotel took us and our bicycles the 5min drive to the airport. Quick check in and a stamp in our passports. Where we discovered that we got stamped on the way in without us knowing it! Sneaky immigration officials ;) 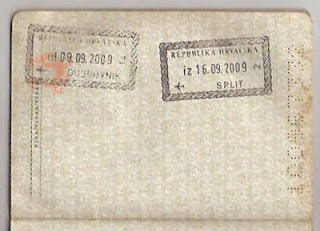 We found a place to sit in the airport and shortly after heard on the tannoy that Easyjet would let us know at 11 o’clock when our delayed flight would be arriving, that was at ten to ten. Oh dear.

Then at around 10:45 we were told our flight would depart at 13:05 and Easyjet had put on a refreshments spread for us. Only ham sandwich and drinks, not good when you are veggie but still not good since the ham was just a slice of cheap ham in some sweet bread, no butter or salad. While nearly everyone was in the queue we were told that the delayed flight would not have much food on board so we should get our food in the airport if we wanted anything on the flight. They don’t call it a no-frills airline for nothing!

We got onto the plane pretty much on time and while the girls were doing their best to welcome us onboard, we were told that given the delay, Easyjet had missed our traffic control slot out of Split and that there was a good chance that we would be stuck on the plane for another 40min.

But, that said, it was pretty good going. We were bumped forward and left about ten minutes later. On all the flights I have taken with Easyjet it is only the 2nd time there has been a major delay like this. But when they stuff it up oh boy, do they do it well.

So the planned ride home from Gatwick is now out of the picture.

But anyhow, the trip to Croatia was well worth it and a holiday I will remember for a long time. It is a country well worth visiting even a second time around. If you do go do NOT miss Trogir.

Leave a Reply to Croatia Day 1 : stress, what is that? | woollypigs Cancel reply