So much for Croatia being a catholic country, I was sure that Croatia would be dead as a Dodo on a Sunday. But no we got rudely awakened by the dustman at 5:20 on a Sunday morning. And again a bit later when then came back to pick up the recycling, I take it.

Again our departing the campsite time was around ten past nine, go figure. 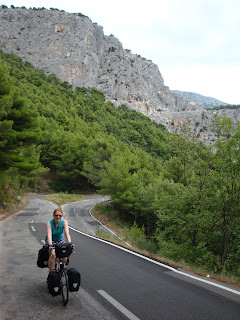 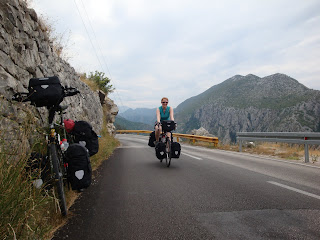 Instead of taking the Adriatic coastal road the last bit into and past Split, we climbed out of Omis inland up towards Gata and just before we then turned towards Split. We pasta statue of Mila Gojsalić who scared the Turks so much that they jumped to their death at this point. The road up to the statue was a nice switchback climb and provided some great views of the valley if you could imagine away the electric pylons. 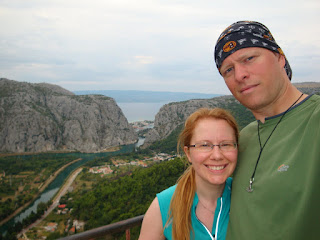 From there is was a great long downhill towards Split, while we had our snack, chocolate dougnuts, we were passed by the cycling road couple we spotted yesterday.

We missed a turn and ended back on to the coastal road into Split and at this point the road had turned into a proper suburban ring road of Split. Not a nice sight and not something we wanted to endure, since I have read quite a few stories about how other tourers have hated this bit. As we found our missed turn, we spotted 6 other cyclists who cheered us on. And as we came to a stop next to them they offered Peli a sip of a 10% Slovakian beer. 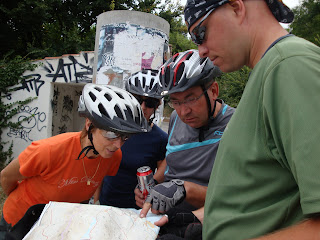 As she said no, I on the other hand said yes, it would have been rude not to! Even when we only spoke English to the main character, he kept talking Slovakian to us, and talk he could! We learned that they spotted us riding out of Omis this morning. And they were cycle touring along to Dubrovnik, though by the look of them they looked like a credit card tourers with a van to carry their gear.

We arrived at the ring road again and had to join it for a mile or so. It was a dual carriageway with a 100km/h sign. I would not like to see this road on a Monday rush hour. A short mile later there was a turn off to Kastel Sucurac which took us off the busy road but took us right into an industrial area, again were we lucky it was a Sunday lunch time. 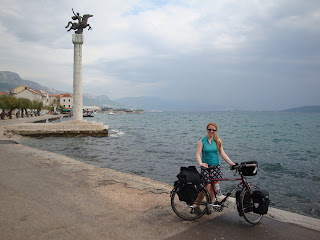 A few miles later I just randomly turned left into one of the many Kastels that dotted the coast. And found a quite nice spot to have a bite to eat, though a bit windy (the weather, not yours truly). As we rolled along the coat towards Trogir the sun started to pop out. We even saw the campsite I visited 20 years ago and it’s bungalows we stayed in, looking just the same. Shortly after we saw a “Scottish” cricket team training. In Croatia of all places…

We arrived and went straight through over to our campsite, Camp Rozac, where we were greeted by a less than smiling reception. 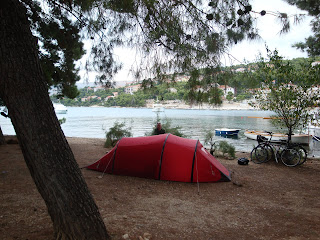 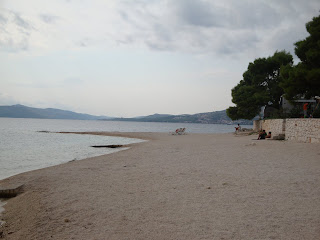 But nevertheless we found a spot right next to the water and enjoyed a dip in the sea. After showers and pitching the tent we headed into Trogir to find food and by all means ice cream. 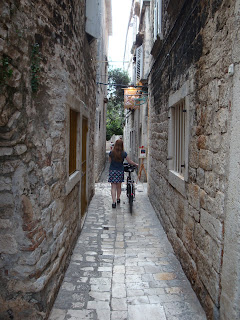 If you like sea food you will be spoiled for choice here, but we manage to find a place that served pasta. Again the freshness of the ingredients and the way they manage to make the sauce so yummily creamy, makes my mouth drool just thinking about it. 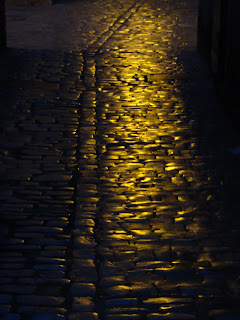 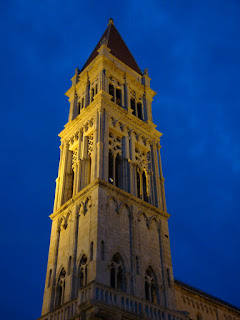 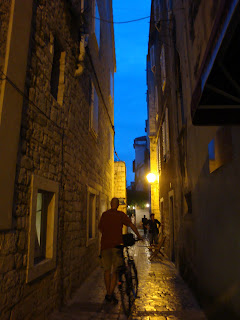 We wandered around looking for ice cream for 20 or so minutes in this magical place, best time to visit is at sun set as it really brings the magic out, just stunning. We found one place after wee bit of hunting only to find 5 more around the corner, ain’t that just so. But hey, we now know where to look tomorrow and the day after since we are staying put for a few days ;)

We headed back to our tent and pretty much crawled in as the rain started… talk about timing. The rain then turned into an 2 + hour long light show with thunders that had us shaking on our downmats. And it also took out the electricity in the campsite – not good when the showers are sensor switch operated. Lucky we weren’t in them but I did hear other soap-sudded moans.