We woke up around seven and took our time getting up. But had breakfast, packed and ready to go by nine. Again we hit the main road on the Adriatic coast, yes busy but the views we got made the hassle worth it.

Just shy of 3 miles into the days ride we met up with the French touring couple again. Soon after we spotted a couple zooming down hill in the other direction. Today was getting the miles in day, since we did some sight seeing in Dubrovnik and had a short day. Traffic was somewhat busy but still plenty space left for us. The temperature went past the 40c and even the wind was warm. The Adriatic coast rolls along with long climbs and decent, the steepest parts is when go down to a village at the sea. 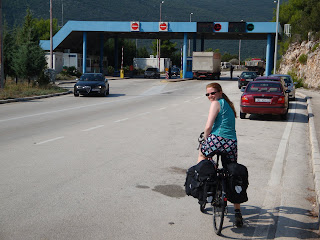 We made good time and soon arrived at the border to Bosnia and Herzegovina, where we just go waved past by the border guard. There wasn’t much different to see though Nemu which is the only town on the coat we went past. Though it did look much more like the old communist, eastern Europe I could remember from 20 years ago. There is many reasons for which I will not go into here. Again we had to zoom down hill to the water in Nemu where we had lunch. 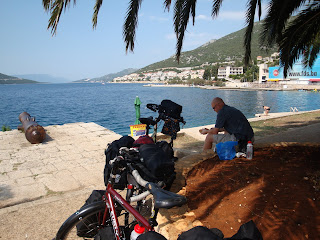 Though it meant climbing up some of the steepest hills we had done on our tour. The map we had clearly said that Nemu was halfway between the two border controls but we where barely out of Nemu before we said goodbye to Bosnia and Herzegovina with a wave by the somewhat bored but nice border guard.

The next bit was hot and rolling hills again, until we came out to the river Neretva delta where we had our first real flat bit on our tour. We passed quite a few fruit and vege stalls by the road side and after the tenth we gave in got some delicious tomatoes and grapes from a nice lady. 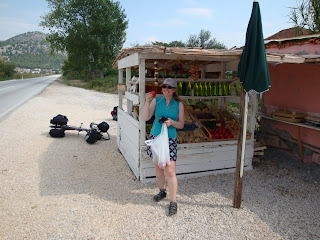 Then the climb back up the mountains began again with some good news, the new motorway from Zargreb to Dubrovnik via Split had reached Polce. So the traffic quited down a bit. As we passed the Bacinska Jezera lakes(I think) on one of the down hills we saw a sole tourer and we both were about to shout Hummers what the heck are…. Oh it is not he ;)

We arrived in Gradac tired and ready to find a campsite and only saw a tired sign saying kamp. We then looked for the tourist information only to find that it was closed for an other 20 min or so. The waiting time was killed by eating ice cream and looking at the sea, ah a hard life. 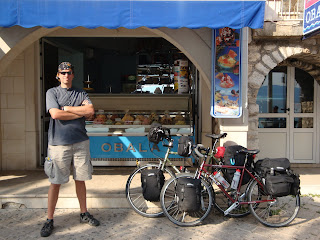 After a quick chat with the nice lady in the tourist office we headed 5miles further south cause the campsite in town wasn’t worth a stay. We arrived at around four in the afternoon and 55 miles later. Kamp Viter was just a road width away from the beach, we found a spot under some threes away from the sun. The hammer erm rock got heavily used to get the pecks in but even with the wind picking up as it got dark the tent staied put. 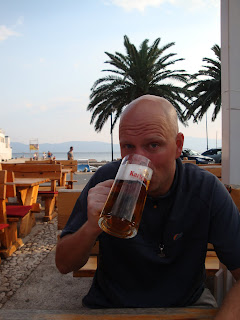 We headed down the the local restaurant where I got a large pivo which I really needed while we waited for our food too arrive. I had chivapacici and shared a plate of chips with Peli who had an cheesy omelet with salad. Food there might not be haute cuisine but boy does the food taste good because of the fresh ingredients. 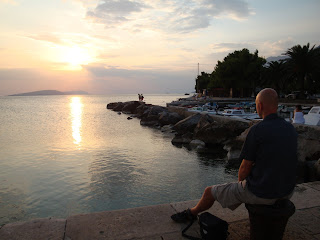 After dinner we looked at the sea and sunset and decided that the sunset was best enjoyed in the water. Quick shower and a early night is due that is if the wind will let us.