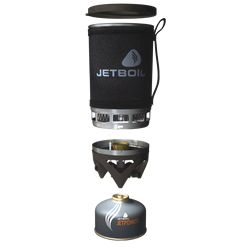 Description: (From their site) Fortify yourself in a flash with our ultracompact 1 liter unit. Ideal for dehydrated meals, coffee or tea on the go, remote work sites, and emergency kits. Travel light and prep easy. The Personal Cooking System (PCS) is a complete food and beverage multi-tool you can hold in your hand and weighs about a pound.

As seen on the blog: Label : JetBoil

I cook my porridge in the micro. Mix milk and porridge together in a bowl, 1:30, stir, then 30sec extra, then add “flavour”, then eat.

We just got a Jetboil PCS (personal cooking system) and I tested it out this am.

I was sure it would be quite intense heat so I used more water than milk, because milk tend to burn quite fast.

I fired it up and set it at medium blast/heat, the milk/water mix started to steam within seconds. I then added my porridge and continued to stir it. Within 30sec I had nice and thick porridge and after yet 15-20sec it was done.

We used it quite a bit while out hunting for dragons this last weekend. Cooking two cups of tea no problem. Some Pasta’n’Sause wasn’t a problem either and even couscous.

We will probably get the pot support so that we can cook up a storm and invite other for dinner, well cook something that is not just for one person. e.g. a meal not just a snack.

It’s fast and light and fold up to a nice size “tube” which fits just fine into a pannier.

It’s been awhile since I have cooked on a stove, like other stoves this takes a bit of time to get used to. But when you have figured it out it does what it should do.

I like the cleanness of the JetBoil, just simple and solid things. We have cooked food for 3 days on it now and it is still running on the same gas canister.

Along with the above we managed to cook two lot of Pasta’n’Sause and two cups of tea before the pressure was too low. Yes we could boil a bit of water but it took forever not the normal 30 odd seconds.

EDIT: 18.04.10 The igniter on our Jetboil just died over the weekend. It can’t be wear and tear so the only way to get it started is with matches which isn’t every easy on the Jetboil. I then emailed Jetboil about the problem and shortly after got the reply, please send us your postal address.

EDIT: 13.05.10 Four or so weeks later I received a letter from the US, which included a brand new igniter and a how to fit it your self step by step guide. No matter how hard I tried to counter-clockwise turn the burner, as it said it wouldn’t budge. But with a bit of fettling around I managed to take the old igniter and replace it with the new one. And the Jetboil PCS is working again just like new.

Cooking up a storm is now never a problem. And brilliant customer service to boot.