Roads an Route :
We did just over 140 miles and I can only say that it has been a pleasure to ride around in Wales. Road surfaces were just brilliant, quite a lot of it was brand new. Even the mountain roads, like the road from Tal-y-bont up and over to Nant-y-Moch Reservoir was really good, some loose gravel but still a joy to ride on.

On the A road we did get plenty of space, though someone did shout at us that we should ‘get a car!’. We interpreted that as Welsh for ‘I’m a tosser’ and pootled on. On the B roads and narrow country lanes we were given plenty of space and people didn’t mind being stuck behind us for a bit.

Trains :
You can skip this bit if you don’t want to read a rant ;)

The train out of London was on time but not ready since there were some problems up north. Virgin trains do have space for bicycles but it is 2 steep steps up. And the space was not big and it was not helped that it was used as a storing space for Virgin newspapers. But the staff were happy and helpful in letting us know where we put our bicycles.

There was a wee bit of panic when we arrived in Birmingham with only 14min change over time and we were 8min late! Lucky the train we needed was due on platform next where we were standing. Arriva arrived with a short train and two bicycle places to a very full platform. The area for putting your bicycles is a cupboard, you can just about get one bicycle in without damaging it. Getting two bicycles is a no go and if you do you are sure to damage them or jam them in so you can’t get them out. 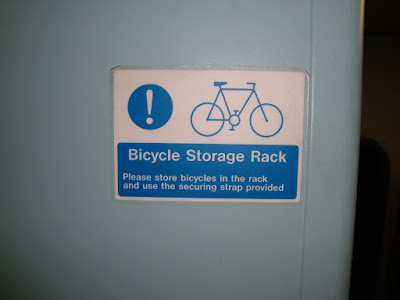 So we squeezed mine into the cupboard and left Milly out in the hall. Because the train as clearly overbooked we had to sit on the floor in the hallway because our seat was taken and also there was no way that we would leave a bicycle standing on its own in the hallway to be moved either by the staff coming through with the food trolley or a passenger. 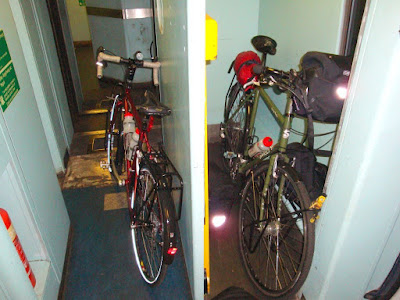 We only managed to get the bicycles out without a panic becasue the train got split up in Machynlleth. But if it wasn’t we would had been moaned at for sure.

That was just the trip out there, going home the train was more packed and there was already a bicycle in the cupboard, so both our bikes had to stand in the hallway. Not fun when the food trolley came by twice.

Just cut the inside wall down of the cupboard down and Arriva will have room for 2-3 bicycles there, some passengers when it is over booked and the food trolley can pass without any hassle. 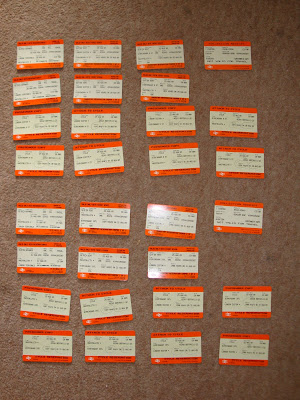 Then there is the cost, we paid around £59 return for both of us and our bikes, from London to Machynlleth via Birmingham and back. We even got 28 tickets of which only 4 of them the conductor was only interested in, what a waste of paper. And here is where it does not make sense at all, train back from Shrewsbury, one way single, on the same train from Machynlleth it would be £120+, eh !?!

Weather :
Well it was Wales ;)

So we got well and truly soaked but at least it was warm. We have had it all, clear blue sky, even saw the stars at 2am, heavy rain, head and tail wind, just missed out on the snow :) Rain was either heavy vertical or a solid wall of drizzle. Most of the time it was thick cloud which we also managed to cycle through. But the best was the last 8 miles down hill with beautiful sunshine, stunning views and a picnic on a golf course just a mile outside Machynlleth.

The load :
We used this ride to test out how much we need and to find our comfort zone. So we loaded extra of everything just to have the weight and get the feel of these lovely Surly Long Haul Truckers. We also added a bit more on the miles, so we now know that we can do 50 odd very hilly miles in one day if needed, but we probably want to keep it around the 40 a day. We also learned quite a bit about how to pack the panniers and what would have been a great idea to bring with us. This is a learning curve and of course the more we tour the better we become at packing the right things.