We loaded up Rob’s (from Les Sorbiers) mini bus, with our bikes plus Richard (a guest at Les Sorbiers), Pingu, Mrs Pingu, Dave, Peli and me, hmm this rings a bell, like I typed this before.

We then drove over the Tourmalet down to St Marie de Campan, where we parked the mini bus. Rob then led us up along the road to the Col D’Aspin, then turned off to do the lesser known (but very worthwhile) Horquette D’Arcizans, the first col of the day.

The ride was beautiful, rolling green pastures, lovely views of huge peaks, and not too hot. The route was littered with left overs from the cows. Why on the road and not in the trees, like the bears manage to? Is it a form of demonstration, I wonder. Hmmm, are they trying to tell us something?

We passed a group of kids hooked up to husky dogs! We’ve no idea why, but it made an interesting photo.

We all posed for the obligatory group photo at the top, with the Pic D’Arbizon (>3,000m) in the background.

The road downhill had been repaired with new patches of tarmac and loose gravel on top. Rob and Richard just pegged it at break-neck speed down the road,(how the heck they can do that beats me) followed by Dave and Pingu, I tried to follow for a bit. But when I went over some newly laid gravel and didn’t hear any tyre noise, followed shortly by hitting some very deep gravel where I had no control of my bike, I slowed right down. There is nothing like being airborne on your bike while doing 36mph+ to get the old adrenalin going.

We arrived in Arreau where we had some sandwiches, though the waitress lady forgot to put any cheese in Peli’s. We also got a Gateau Basque (nomnom – some were a la creme and some a la cerise noire), and again the waitress forgot to count in the one for Peli. Are they trying to tell her something?

While we cashed up the waitress messed up the bill and it came to a grand total of 93 euros, for 7 sandwiches, cake and some drinks !!! Glad Rob was on the ball and sorted that out right away.

We then headed out of town and up the east side of the Col d’Aspin, while I was getting into my rhythm two gents came zooming past at a speed I would have trouble keeping up with on the flat. Rob later told me that one of these gents is 66 years old and 58 kilos, feck me. 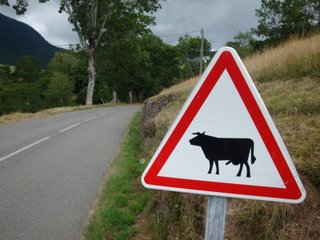 Col d’Aspin is a beautiful climb, nice and snaking up the mountain and with some astonishing views. At one point a lady in, let’s say, her ‘3rd age’, overtook me, asking me about Chutney how these small wheels could keep up on the hills. Bike just fine, the rider no, was all I could tell her.

The clouds started to close in when there were 6-7 km to the top. I could feel a few drops hitting me as I did the last km. It is hard on oneself when you see that you have cycled for a km but only gained 50m in height, and you are so knackered of cycling up the steep hills.

I arrived at the top to find Peli there, chatting to a fella who had started at the same place as us (wearing baggy knee supports – Mrs Pingu called them Nora Batty supports ;). We then awaited the Pingus’ arrival and Mrs Pingu was told by a French man that she had to cross right up to
the white line before she could rest :) The French man was happy to take photos of us, before we headed down through the forest and clouds, back to St Marie de Campan.

We arrived back at the mini bus to only find that Richard already been and gone an hour before us, with Dave around 30min behind him. Peli had been nagging me all the way back to the mini bus to ride up the east side of the Tourmalet (17km), but with the sight of the broomwagon and my sore bum, I said no thanks. A quick goodbye and she and Pingu headed up, while Mrs Pingu and I got a lift in Rob’s mini bus.

At 3km to the top of Tourmalet, with a vision of 5-8m we spotted Richard still going very strong. Up and over we went and it cleared up on the way down to Bareges. We just arrived in Les Sorbiers to see the Tour finishing for the day and minutes later Richard arrived, how the heck can he d
escend that fast?

I have now been home for an hour and a half and still no sign of Peli, she must have got lost in the pea soup or just a wee bit tired from doing 3 cols in one day.

36 miles for me and good bit more for Peli.

UPDATE : She eventually arrived 2.5 hours after I said goodbye to her in St Marie de Campan, having climbed the Tourmalet at a steady pace in the great company of Pingu, donkeys, cows and some talkative sheep who had a conversation with her when she baaed at them. Peli managed over 41mph on the descent to Bareges. :)