Home Cycle Touring To the centre of NZ (Makarora – Queenstown) 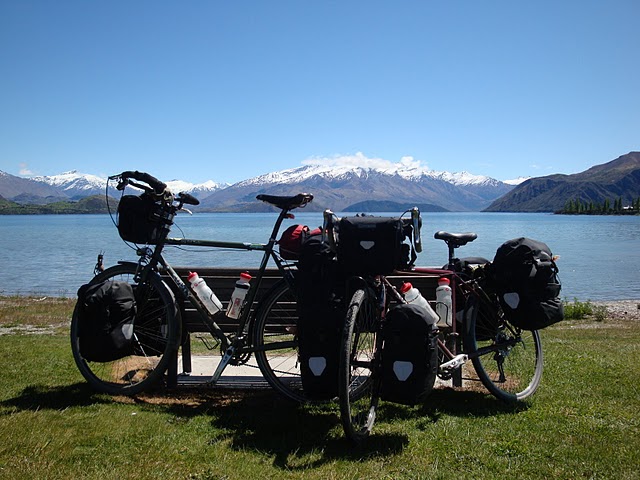 Avoided the rain in the rain forest and got sunny views and rolling hills. Met some great Kiwis who took us on a guided tour along a river. Steep hill and wild camping in a church yard. Now a rest day with a massage.

As we pulled out the parking lot into the pretty much downhill with a tail wind, it made up for the wet last two-three days. Again stunning view and beautiful weather, who would have thought that the wetter than wet day could turn into such a nice days ride. 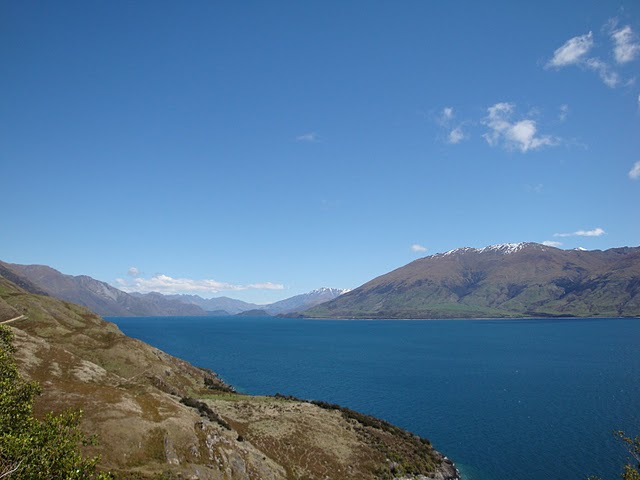 Some of the country side here made me think of southern Germany, just needed the yodelling. We then followed Lake Wanaka view stunning views before a step climb over The Neck to Lake Hawea where we were greeted to yet more stunning view. Our photographs will not do this place any justice. I was thinking about kipping for the night at a DoC at the top end of Lake Hawea, but Peli wanted to push on.

We pulled into the first motor camp which had tent pitches and asked if there was room at the inn for the night. The proprietor booked us in at told us that we could pitch up anywhere since it was low season. We found a spot in the sun and got ready to shower and cook our dinner. We walked down to the lake to view the sun set on the mountains, that is something that is hard to get tired of looking at.

We then got chatting to Paul and Penny who were very interested in our bicycles as they were about to embark on a years trip through Europe. Many ideas and info were swapped until they told us about a track that we could use on our way to Wanaka. They soon said we will take you some of the way tomorrow.

35 wonderful rolling hills with a tail wind for once.

After breakfast we all four rolled out of campsite and our guide took us on a wonderful track running along the river and lake all the way to Wanaka. We chatted about where to go in New Zealand and Europe marbled at the stunning views.

At the halfway point they told us that in Wanaka was a brilliant cake and organic shop that we had to visit. We told them that for their help they we would offer them tea and cake at said shop. And true to their word the carrot cake with home made yoghurt was utterly yummy.

We said our farewells and they rode home and we headed for the Crown Saddle, at 1080 metres our highest pass yet in New Zealand.

The road out of Wanaka was easy but when the climbing started it got spooky. Our legs said that we were climbing, the GPS kept counting up but what we looked at clearly looked like it was going down, weird feeling.

At Cardrona we had cycle around 40 miles that day and the hill started take its told. We asked at the only bar and hotel in town, pretty much the only thing in Cardrona if we could pitch our tent there. They didn’t let us stay so we went down to the old town hall and church. Both has been placed elsewhere and used as the other other the year and still in use. There was a bran spanking new toilet block next to them that we could use while we camped out behind the town hall.

After dinner we went down to the Cardrona Hotel and enjoyed a rather nice Cardrona ale and a cup of hot chocolate before our bed time. 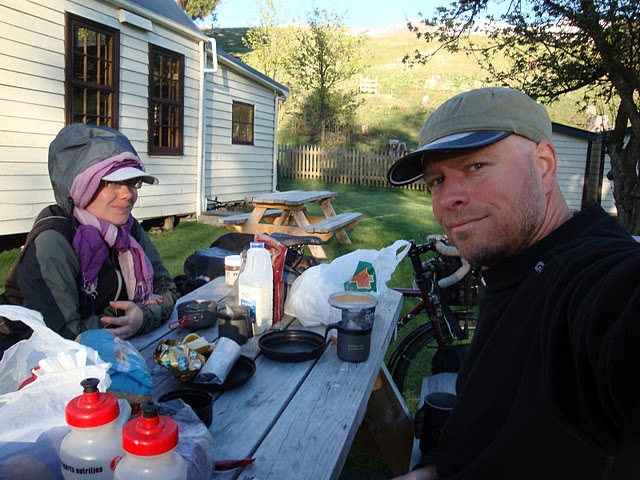 Up nice and early and since the sun was still hiding behind the mountains the valley we were in too its time to heat up. So breakfast was cooked and enjoyed wrapped up in everything we could get hold off.

The spooky hill continued until three miles from the top, where it turned into a normal hill and went up. And up it went too, the first part of the hill was easy to climb, slow going but we could to it without much struggle. The last three miles was rather hard and the view was really enjoyed while we rested.

We saw plenty of caravans arriving and one person jump out to take a picture of the view over Queenstown. They really can’t say that they did that climb. All cooped up in a nice warm van, then stop every now and again as the zoom past the world to take a picture.

The next bit was well fun, yet a bit cold still, since we now had a down hill all the way to Arrowtown. We stopped a few times to take in the view. One of these times a pro cycling team called PureBlack Racing out for a ride. It did look like they we out for a photo shoot since they were followed by three camera men. I have now learned that when we saw them they were getting ready for their debut in the Tour of Southland, where they at least had one stage win.

We cycled into Arrowtown a rather nice little town for our lunch, one the way we got passed by the racing team with some cheery hello’s. I had found cycle route on the net somewhere, that would take the back roads, tracks etc to Queenstown. 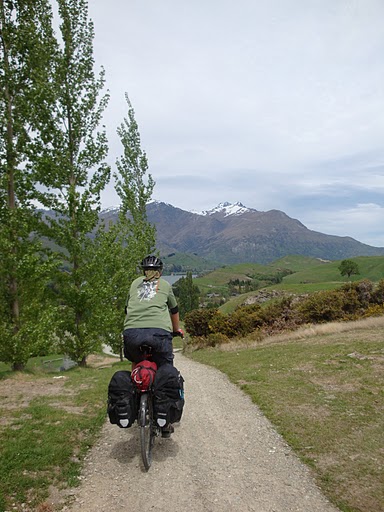 Though the development of a golf course complex made it rather had to navigate out of Arrowtown. The gravel roads were nice and hard but with big and round stones made cycling rather hard. Our wheels were skipping and sliding around the place nearly knocking us off our bicycles a few times. I would say that we are experienced cyclist but this cycle track is a test for a fully loaded tourer or someone new to cycling.

We bailed out and took the main road into Queenstown after Peli a near fall and we both got rather tired of trying our bicycle upright.

We camped for the night at Frankton Motor home and caravan park just outside Queenstown, a rather confusing place as there was normal housed within the campsite.

Our first real resting day, nothing planned other than kicking back. We booked ourself in for a massage at Frankton Therapeutic Massage a few minutes up the road. We got the full treatment, warm stones, deep massage with sensual oils etc. and were well relaxed for the rest of the day. Got our washing done and read a our book and feed ourself.

Click here to see the photos : To the centre of NZ